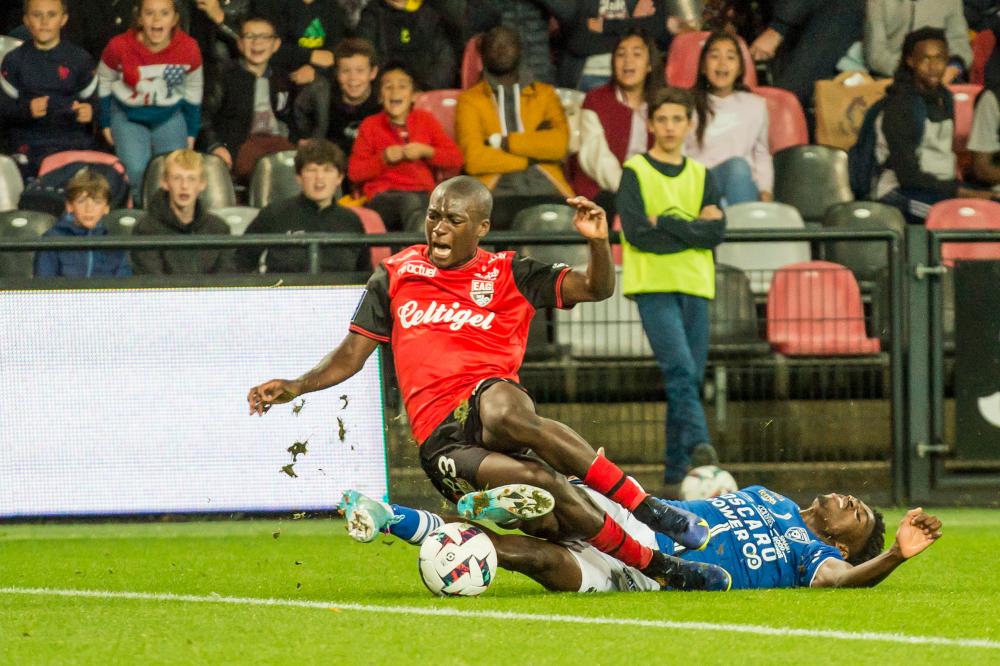 After a disputed match, Guingamp finally lost against the Herbiers following the penalty shootout (2–2 then 3–4 on pens). The Costa Rican club therefore leaves the competition by the back door.

En Avant Guingamp faced Les Herbiers this Saturday evening for a remake of the 2017 meeting, which at the time had turned in favor of the Costarmoricains after extra time (2-1). And despite the gap in divisions (Ligue 2 and National 2) between the two formations, the meeting promised to be difficult for the men of Stéphane Dumont.

Lacking confidence for several weeks, the Bretons have not won in the league since September 17th. On the other side, the Vendeans stalled after a great start to the season. All the ingredients were there to live a great meeting of the Coupe de France. And the poster kept all its promises.

The 22 players present on the lawn of Massabielle immediately imposed a great intensity in the battle in the middle of the field. While the two teams offered a pleasant vertical game, it was Gaëtan Courtet who created the first chance of the match, but his shot from the left went just wide of the post (5th).

Minute after minute, the Costa Rican club began to set foot on the ball and settled into the opposing camp. Jérémy Livolant did not go far from opening the scoring before coming up against the Herbret goalkeeper (12th). But the locals were not left out since a few minutes later, Dominique Youfeigane had to work to stop a dangerous header from Isaac Matondo (19th).

Guingamp in front at the break

Following a millimeter cross from Jérémy Livolant, Gaëtan Courtet finally unblocked the situation with a spiked header hit by the Vendée goalkeeper (0-1, 24th). En Avant Guingamp took the lead as the N2 team had a strong moment for a few minutes. But against all odds, the Costa Rican defense unfortunately conceded a penalty in stride.

Isaac Matondo rushed to perfectly deceive Dominique Youfeigane (1-1, 30th) and the game was therefore completely restarted. The ball was going from one side to the other at this time in a completely unbridled match. Before returning to the locker room, Dylan Louiserre however restored the advantage to his people with a sublime strike in the skylight (1-2, 38th). At the break, the Bretons therefore led the dance (2-1), even if nothing was definitively settled, far from it.

Les Herbiers equalize thanks to an exceptional goalI

As expected, Maxime Barthelmé’s partners tried to take the break to take cover at the start of the second period. And they did not go far from scoring again since Rémi Pillot made a magnificent save to remove a header from Jérémy Livolant (52nd). Despite everything, the premises continued to be dangerous in counter-attack. And following a fantastic volley from Lucas Daury, Les Herbiers managed to equalize (2-2, 66th).

The pressure was mounting on the pitch as the end of the game was fast approaching. The Herbretais then tightened their defense so as not to concede a goal which could be synonymous with elimination at this time of the game. As for them, the Guingampais tried everything for everything like Jérémy Livolant who missed a great opportunity in the very last minutes (90 + 1).

And as the final whistle sounded, the score was still tied (2-2) between the two teams. Costarmoricans and Vendeans then headed for the dreaded penalty shootout which ended in suspense in favor of the residents of National 2 (3-4 tabs). En Avant Guingamp is therefore eliminated from the Coupe de France.

Sebastien Kep (URB): “You have to take goals one by one”